A FEW days ago, the German Ambassador of BEIJING, Prof. Dr. Jan Hecker has been declared dead. There was no explanation for Hecker’s cause of death, which has been 2 weeks since he took office. However, it was obvious that Berlin was greatly affected by the news of his sudden death.

Along with surprise, there was also anger and rage.

The limited availability of explanations about the event magnified the mystery.

While there was such a painful struggle on the Silk Road, the news about DEATH was not welcomed naturally.

Another important development took place after Ambassador Hecker’s death. This time, Russian Emergencies Minister Yevgeny Zinichev was dying while trying to save a cameraman who had fallen from the cliffs during an exercise in the NORTH POLE.

However, the fact that the two deaths were coming one after the other raised the suspicions. These deaths also showed that the struggle stretching from the GERMAN-RUSSIAN approchement to the Silk Road and to China was tough.

Obviously there would be more.

EUROPE being squeezed would have brought the reaction…

For a few days, I have been writing about the European Army, Macron, Merkel, the pressure of Europe by the USA-UK. I’m trying to convey that the balance of things has changed after Brexit… Let’s move on from here again. Through an important name.

I’ve written about it before.

DER SPIEGEL MAGAZINE had made a cover and placed the 4 leaders on target. TRUMP-ERDOĞAN- PUTIN-CINPING… 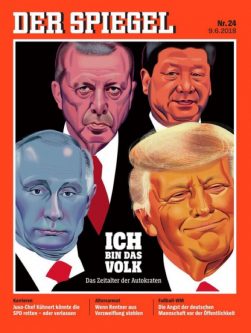 The magazine shouted to Berlin, “STOP THESE!” it was saying.

George Soros, who fit into this equation and represents a trend, was performing at every important event…

Soros was also present in the process when England bid farewell to EUROPE with 52 PERCENT. The famous speculator insisted that “ENGLAND MUST NOT LEAVE EUROPE”

And for this, he was trying to prevent Brexit by donating huge amounts. He touched on this issue in Davos and said, “Prime Minister Theresa May will not be in that seat for long.” That was what happened! Soros added that the UK would have very difficult years with Brexit.

He also shared that “it will be too late when the British understand this”.

Money magician Soros, as on the cover of DER SPIEGEL, was followed by fierce opposition to Trump, Erdogan, Putin and Cinping. He was very harsh and rude to Trump.

“Even in the United States, a rogue president like Trump could be elected and undermine democracy from within.

However, it is a temporary phenomenon.

He will lose in the next election,” he said.

He was right about Trump. He took the Silk Road very seriously and criticized it at every opportunity: “With the Belt and Road project, it is hoped that land, rail and sea links will be developed between China and other countries. This project is done for the interests of China, not other countries.

Infrastructure projects are mostly financed by loans, not grants, and foreign officials are bribed to accept them…” He didn’t find Cinping DEMOCRATIC anyway and was constantly criticizing him.

He was describing Beijing as “China is not the only authoritarian regime in the world, but the most prosperous, the most powerful, and the most technologically advanced.”

He suggested that Cinping would use artificial intelligence and learning machines to further strengthen totalitarian control in the country. Soros, who kept talking about Trump, made a call to “stop world trade and fight China directly”…

He also frequently emphasized that Chinese technology companies were a danger to the world.

The famous money magician Soros brought almost all of his writings and speeches to the EUROPEAN UNION.

He predicted, “If the pro-European Union majority does not wake up before it is too late, the EU will be wiped out from the stage of history. If necessary actions are not taken after the pandemic, we will see a similar disintegration of the Soviet Union in EUROPE…’

This is why SOROS, which has become the iconic name of the anti-Trump movement, was targeted. A box full of explosives was left in the mailbox of his house in New York… Soros was also against Bush! “I’d spend my last penny to get this man to go,” he said. It wasn’t enough, he was placing two full-page ads in the Wall Street Journal.

“President Bush is endangering our security, harming our vital interests…” he was declaring war on the White House…

The world-famous speculator chose BLACKROCK as a target the previous day. The issue was of course the Chinese issue! Writing for the Wall Street Journal, SOROS harshly criticized BlackRock, the world’s largest money manager.

Arguing that customers’ money will disappear, the money wizard underlined that the USA also faces a security risk. BlackRock, on the other hand, stated that they are happy for the 1 BILLION DOLLARS they will invest in China.

It was possible to read the big fight over USA-EUROPE-ENGLAND-CHINA in this way. Even BlackRock’s investment was enough to explain the US-China relationship! Soros’ recent appearances have revealed who the fight is between and who. Look at the axis from the cover of Der Spiegel to Brexit, from the friendship of Trump and Erdogan to the idea of the European Army.

The sides are clear.