My Allah! My Allah Whom I give my life for HIS Sacred names!

YOU are making Armenians who call me as “Red Sultan” and do their best to overthrow me be rended by those who have overthrown me! Who knows YOU will make hangmen be rended by whom?

But, O AR-RAHMAAN (The Most or Entirely Merciful)

If YOU appear with YOUR justice, we will all be ashes! Pity us! Appear for the nation who is in this situation because they lost the Messenger, the Beloved, the Master of the Universe’s light with YOUR grace, goodness, favour.

O AL-QADEER! (The Capable, The Powerful)

I can’t remember missing a fardh prayer in my life! But I can’t find the force to argue that this is my only time for prayer! Rather than bending over YOU, I’m stiffening and rather than passing away, I’m squirming in my bed! Forgive this servant who cannot worship YOU, my Allah! If I was able to remember YOU, YOUR Messenger(SAW) just for once in my reign that lasted for years as much as my rosary beads, accept my prayer for the sake of that moment.

Do not refuse this old man’s prayer who, on the Day of Judgment, will beg like “my nation, my nation!” at the foot of the Beloved, who are begging like “my Ummah, my Ummah!” now with these shaky hands! Save my nation from the false rescuers and fake salvations that led them to the destruction with the death without “Ba’u ba’de’l-mevt”(The Truth of Resurrection after death); And bestow them the rescuers who will come one day, true salvation!

I have no hope for prosperity that I can have in this world now. At least, don’t bring me disaster anymore, my Allah! I feel fatigued! When will I die, my Allah? 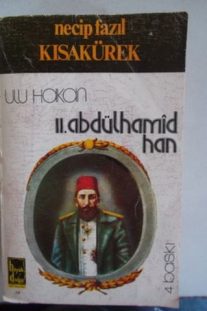 The Meaning of Tasavvuf

The Intelligence of Sayyidina Ali