“Kuruluş Osman”, which was broadcast in 37 countries around the world with ATV, was at the top of the ratings with great interest from the audience in both seasons.

‘Kuruluş Osman’ series, which had huge ratings reached hundreds of millions of viewers in all countries where it was broadcasted. Mehmet Bozdag, the producer-screenwriter and project designer of the series, announced that the start of the new season has started filming on his Instagram account. In the post, Bozdag shared with the audience the message “We have started filming the new season of our TV series, “Kurulus Osman”, which we set out with great efforts. I wish good luck to our actors/actresses and the whole team”.

In the second season finale of Kurulus Osman, which tells the story of the march from the Kayi Tribe of 400 tents to the world state; Osman Bey, who consolidated the Turkish dominance in the border region with his victories, won a great victory by defeating the Byzantine army led by Commander Dukas and Inegol Tekfuru Nikola.
Osman Bey finds out that Bala Hatun is pregnant by receiving the good news of his heir.

“The audience will watch a completely different Kurulus Osman” 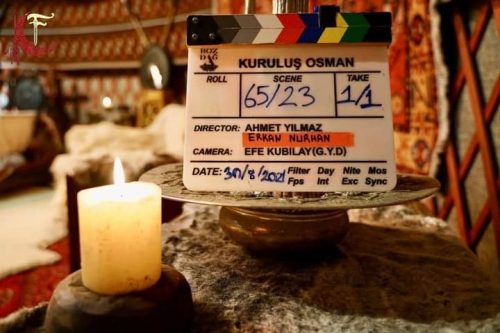 While the countdown for the new season continues, Mehmet Bozdag, the producer, screenwriter and project designer of ‘Kurulus Osman’, said that the story will grow in the third season of the series with new characters Stating that they will explain the process of establishing the state with new victories and strategic moves by Osman Bey, who established dominance in the border region.

He said, “We will now cover a period when Osman Bey’s moves resonated not only in the border region, but also in Byzantium, the Western world and the whole Anatolian geography. He is considered a genius by all world historians. We will explain about Osman Bey’s strategy, science, politics, relations and commercial successes as well as his heroism, the audience will watch a completely different Kurulus Osman,”

So there you have it folks, some great news and clues about the start of Season 3. Get your popcorn ready Season 3 is going to be the best yet.